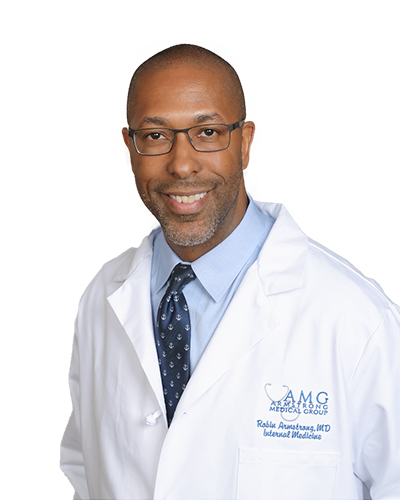 Dr. Robin Armstrong has always worked to be a servant leader throughout his life. He has been married to Martha Armstrong for 24 years and has four sons, Daniel, Gabriel, Joshua, and Noah. Robin was born in Texas City, Texas and attended La Marque High School where he graduated in 1987. Robin played football on a state championship runner-up team and ran track and field in high school. He attended Texas A&M University and earned a degree in microbiology in 1991.

Robin returned home after college and attended medical school and completed residency at University of Texas Medical Branch in Galveston.

Robin and Martha met in medical school where they were gross anatomy partners. They dated in medical school and were married December 13, 1997. 5 1/2 years later they gave birth to their son Daniel, and eventually had three more sons.

Robin is a man of deep faith and his faith directs his values and beliefs. He believes that all men and women have an eternal flaw, are loved by God, and saved by grace. His motivation to serve is moved by this motivation. He has served on two missionary journeys to Africa, has been to Nicaragua on a medical missions and has been involved in his local church for many years to present.

Robin practices medicine in his home town and is an owner of Armstrong Medical Group which is a group of hospital and nursing home physicians, nurse practitioners, and physician assistants. Our largest hospital based practice is at the hospital where Robin was born. Robin has been involved at all levels of hospital leadership including on the Board of Directors of the hospital, President of the Medical Staff, Chief of Staff, Chair of Internal Medicine.

Robin has been involved politically as well, serving locally as a precinct chair while in his medical residency. He has served as an election judge, a city chair, as an executive committee member of the Republican Party of Texas (SREC), and as Vice Chair of the Republican Party of Texas. In June 2012 he was elected to the Republican National Committee (RNC) as Texas’ National Committeeman, where he serves today as Vice Chair of the Southern Region of the RNC, Rules Committee member, and on the Faith Advisory Board of the RNC.

Dr. Armstrong has been a frequent guest on One America News Network and NEWSMAX television. He has been on radio programs all over the United States including major media markets of Houston, New York City, Las Vegas, and many others. He has appearances on Fox News’ Laura Ingraham Show, the Glen Beck Radio Program, and the Ron Paul Podcast show. Dr. Armstrong has been featured in national publications such as Rolling Stone Magazine, New York Times, Wall Street Journal, US News and World Report, and USA Today. He was featured for his successful treatment of 38 COVID-19 patients at one of his nursing facilities where he serves as medical director. Robin has been on healthcare panels with President Trump in attendance at the Whitehouse and recently participated with President Trump on a panel named “Transition to Greatness”.