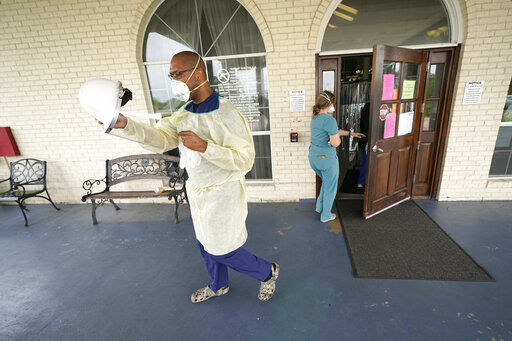 First, he needed to find a supply. But at a moment when President Donald Trump is heavily promoting the drug, Armstrong is no regular physician. He is a Republican National Committee member and GOP activist in Houston, and after calling Republican Lt. Gov. Dan Patrick, the Texas chairman of Trump's presidential campaign in 2016, Armstrong soon had enough doses to begin treating 27 infected residents of The Resort at Texas City.

Armstrong, the medical director at the facility, said Tuesday it is too soon to tell whether the treatment will work. But his sweeping use of the drug at one nursing home along the smoggy Texas coastline illustrates how Trump's championing of the medication is having an impact on doctors across the U.S., even as scientists warn that more testing is needed before it’s proven safe and effective against COVID-19.

“I probably would not have been able to get the medication had he not been talking about it so much,” Armstrong told The Associated Press.

Hydroxychloroquine is officially approved for treating malaria, rheumatoid arthritis and lupus, not COVID-19. But as Trump holds out promise for the drug in the face of a mounting death toll, he has often stated, “What have you got to lose?”

Now in Texas, political connections and Trump allies are helping push the drug into the hands of more physicians.

Republican Bryan Hughes, a Texas state senator, said he is helping organize a pipeline of hydroxychloroquine donations to other states through their GOP leaders. Hughes said he has spent recent weeks helping Louisiana, Mississippi, Arkansas and Georgia receive or expect shipments from Amneal Pharmaceuticals, a maker of the drug based in New Jersey. Last month, the company announced it had donated 1 million tablets to Texas.